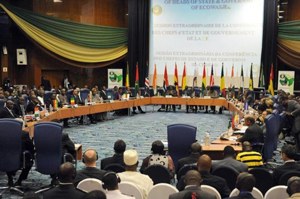 As part of efforts to standardise and harmonise airport and aviation infrastructure among the 15 countries in the West Africa sub -region, the Economic Community of West African States (ECOWAS), has embarked on a comprehensive study of airport facilities.

Daily Independent learnt that in the course of the study, the regional body would pay special attention on safety standards, technical capacity, funding, maintenance of equipment, gaps among other areas.

The idea behind the study stemmed from the need to benchmark aviation infrastructure within the region in line with the International Civil Aviation Organisation (ICAO) standards, which each member state would be required to attain.

Receiving the ECOWAS technical team in his office at the Murtala Muhammed Airport (MMA), Lagos, the Managing Director, Nigerian Airspace Management Agency (NAMA), Engr. Ibrahim Abdulsalam, commended ECOWAS for the study, just as he expressed confidence that the report of the study would provide ways to build a uniform aviation structure across the region.

Abdulsalam also advised the team to “make a good distinction between airport and airspace infrastructure in the course of the study.”

The ECOWAS technical team commended the organisation for putting in place radar system, adding that Nigeria’s radar infrastructure ranks among the best within the region.

Speaking during the visit, the Leader of ECOWAS team, Mr Olumuyiwa Shokunbi stated that in terms of navigational and surveillance equipment, Nigeria had gone ahead of several of the countries the team had visited

According to him, “Nigeria is way ahead of several other countries we have visited in terms of Navigational and surveillance infrastructure and same applies to the technical capacity of personnel that run the equipment.”

Meanwhile, as NAMA prepares to deploy the Controller-Pilot Data Link Communication (CPDLC) service soon, the agency has sent 24 of its technical and Operational staff on CPDLC training in Paris and Germany.

The managing director of NAMA stated that the staff that departed during the week were expected to spend 10 days in these countries for operational and technical training on the facility.

According to the NAMA boss, the breakdown include 12 Air Traffic Controllers (ATCs) six Air Traffic Engineers (ATEs) and six engineers, adding that a successful airport hub implementation test for CPDLC linking the airport hub to SITA hub through fibre and radio had been carried out.